One day Chuck was shot in the chest by some fancy Van Saar’s gun. The bullet went straight into his heart… Well his heart pumped it right out and shot it back in the Van Saar ganger’s head!

Not clever to shoot at Chuck…

When I first decided to ask for Necromunda for Christmas I did not do it for the Goliath, I did it despite them being one of the two gangs in the box. I understand their place in the Hive and I can see why people would like them but me…not so much. Big guys, big guns, big biceps, no hair, just not my style.

Who was I really excited about? Escher! I started working on my Escher background story even before getting the box. I had a story for them, I wanted to tell it to everyone (and told it quite a few times to my wife actually) and I had LOTS of ideas to convert them.

Then what about Goliath? Well the plan was build them and paint them « quick&dirty », more or less like I would for NPCs, then loan the gang to a friend in order to be able to play the game quickly after getting the box. You could say I was not inspired.

Then I saw some people from the warmongers community starting to get their Necromunda goodness (I had to wait untill Christmas so I was late to the party) and my mind just started to work on its own as it often does when I am building up excitement while waiting for a new toy. I had my idea for Escher and my other Necromunda ideas would have to wait untill more gangs would be re-released, so I started to think about those Goliath.

Is it true that I do not find that inspiring? Don’t they deserve as much love as any other mini after all? Would it be fair to speed paint them only to field them in test games?

I did not like the Goliath because I am not really into the « all-muscles-big-guy » kind of heroism. So what, should I undertone them? Make them disappear? You do not make such big guys disappear easily. Then it struck me, I had to take the problem the other way around, I had to « overdo » them. They had to become more than themselves, they had to become so characterful that what I disliked about them would become grand. They had to be bigger than themselves (which is quite a challenge), a tribute to all the action movies from the 80s and 90s that I now watch and enjoy in my own weird way (but this is not a blog about my taste in movies). These Goliath had to be my Rambos, my McClanes and my Balboas… That is how « The Expendables » gang was born.

I do not know if you are familiar with « The Expendables » franchise, if not I think you should watch the movies. First they are enjoyable per se because all the guys starring in them are having fun playing basically their own character (or more exactly the fictionnal character that defined their career) in a way very similar to a bunch of kid playing « let’s pretend ». Then I do think the movies are interesting as a tribute to and a review of the action movies in which all the actors starring in « The Expendable » franchise played when they were younger. Not only are the movies kind of « remakes » of movies from the 80s and 90s but they tend to cut all that was unnecessary in them (like any kind of scenario) to go down to one thing which defines their aesthetic (well actually four): big guys, big guns, big biceps, no hair.

Call me crazy but I do think there is more to these movies than first meets the eye. They are not only movies done like in the good old days, they concentrate the pure essence of the genre. By doing so they deliver a message about these 80s-90s action movies, they underline the characteristics of the « school » and…well… I promised this was not a post about my taste in movies so… [I’ll be happy to talk about that if any of you fancy it actually]

Well, as you may have understood I was excited about my idea and unexpectedly, when I came back home after Christmas I started building the Goliath gang before the Escher  gang (and here I am working on a post about them and not the Escher).

I had to start with the leader, I am sure you already guessed who he was based on… 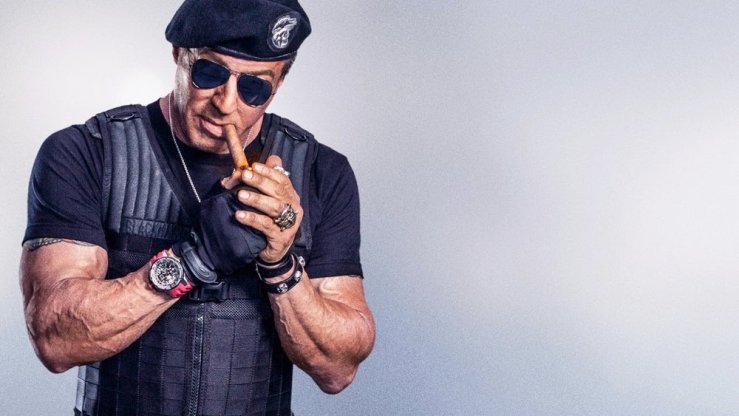 It was a test really, one of those conversions you make to try new things, see what you can do. Just something to have fun with, nothing serious, nothing that would actually look any good. Plan still was a quick job on the rest of the gang, a black colour scheme and be done with it.

Well trouble is I had so much fun making Sylvester, my gang leader, that I wanted to make other conversions. Then I remembered Rourke plays in the first movie, and well…one thing led to another and I went a little crazy: « Let’s forget about that quick build and fast paintjob, let’s take months to convert, assemble and paint ten minis I did not like in the first place, let’s do this job seriously, because that is what we crazy hobbyists do! ».

The guy walked right to Mickey and stared at him in a weird way, obviously intoxicated and obviously looking for a fight. After a few minutes he shouted: « Hey ugly face, what are these gross rat tails growing out of your shitty hat? Shave it or get out of my bar! ».

Mickey slowly put down his glass and looked at the guy, a crazy spark in his eyes and a crooked smile on his face…then he punched the guy in the face so hard that he sent him rolling and bouncing halfway across the room. Within seconds the whole thing had escalated into a full scale bar brawl.

Too bad thought Jason, while beating a patron with a chair, this had been a good place…

Here are the nine first recruits (there still is one slot to fill and many good candidates, I am open to suggestions): 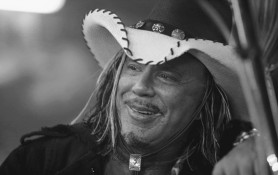 The Expendables – Terry aka « Big Gun »

The Expendables – Arnold aka « The Governor »

The Expendables – Jean-Claude aka « The Philosopher »

The Expendables second in command – Jason

I intend to have an avatar for each one of these guys. It is going to be a lot of work, but it is a lot of fun, so I guess to hell with reason!

Sylvester casually lit his cigar. The other guys were now exiting the foundry. The explosives were set and soon that Orlock held little facility would be reduced to ashes. The gang leader inhaled a puff of synth-tobacco and exhaled slowly while watching his chrono. His boys were out and the explosives should have blown up by now…

Suddenly bullets started raining on the gang from every direction: they had fallen into a trap!

Sylvester grinned and drew his bolter: « A trap… This was going to be a fun job after all… ».

The gang is still a very early WIP. Some of you may have seen pictures of them on twitter and insta, but expect more to come soon (and maybe a quick backstory too).

Mickey (the crazy one), before converting his head. 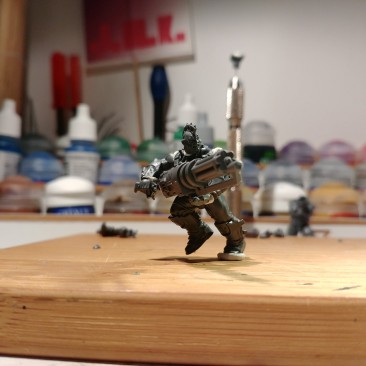 Terry, the guy with the BIG gun. 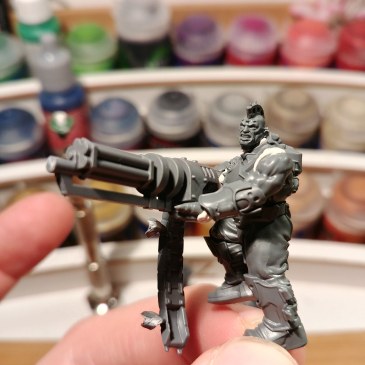 Why not had an ammo rail…

That’s all folks, hope you enjoyed it.

Banner picture & pictures from « The Expendables » belong to whoever now owns the rights to the franchise, i.e. not to me. Escher and Goliath artworks are owned by GW. The pictures of my WIP gangers are mine and were taken by me on my new fancy phone.

#ProjectMaze, an adventure inside the mind of a crazy hobbyist, is definitely a go.
In the dark corners of my mind a new crazy project is slowly taking shape.
#MordheimXXI #Mordheim