This post was inspired by a talk we had with @theantifunk on twitter about papercraft scenery. It started with a picture I shared where one could see one of my Mordheim table covered with buildings from davesgames.net and then quickly escalated (as all good talk with warmongers on twitter should) as @theantifunk started to build new papercraft scenery and I started to share mine. Anyway, in the end, it seems more appropriate to share some pictures here.

Back to the Future…

It was back in 2010, a friend (yes, one of the guys I talk about here) and I wanted to start playing wargames again. It was around the time GW published old rules of specialist games as free pdf on their website. We decided we needed a skirmish game because we could no longer rely on our parents’ war credits (we were still students) and wanted small manageable collections to start playing quickly. The idea was also to make it easy for other people to join in.

We hesitated a bit between Necromunda and Mordheim (both of us were Confrontation players but since the company had collapsed nobody would be able to join us and we wanted to form a gaming group). In the end, we chose Mordheim, because we were more into fantasy I guess.

Our first test game was…kind of low on scenery… 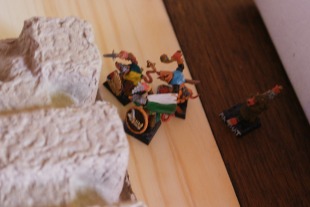 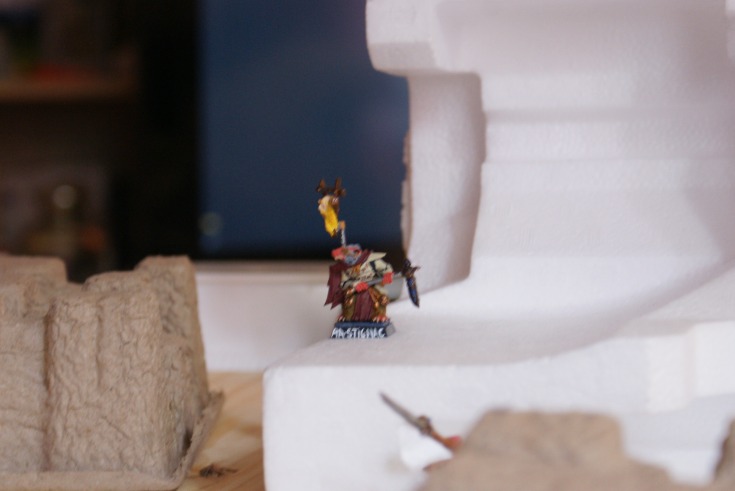 We liked the game (a lot), but felt that we needed scenery to make it really immersive.

We started to hunt for potential players and a group of two became a group six. Six people who did not know each others decided to meet for a game of Mordheim at my place on a Saturday. We had a Skaven (myself), a rogue Elf (my first accomplice), an Orc, a Sister of Sigmar, a Sigmar Pirest and a Vampire, all thrilled to hunt for warpstone in the gloomy streets of Mordheim.

The only thing we lacked was…Mordheim.

I realised that the lack of scenery could ruin the game for everybody so I went on a quest of my own to build a city worthy of the players. This was to be done in a few days since…well, my planning was not optimal.

I used to enjoy papercraft a lot when I was a kid. That memory, internet and luck (or was it the Horned Rat guiding me?) allowed me to find my saviour: davesgames.net. Cheap, easy to build and great looking scenery, what was not to like? I downloaded some models, bought some glue and cardboard paper, turned on my printer and started building a city.

I wanted an impressive game table for I wanted that game to be a great game, so that the people who came to play that day would come back. Thanks to my wife’s help (what would I do without your support?) we achieved what I had in mind (actually the glue on the last building wasn’t even dry when the players arrived, I can be pretty ambitious when it comes to hobby projects).

Here are so pictures of that first table.

There is an Elf in the attic… 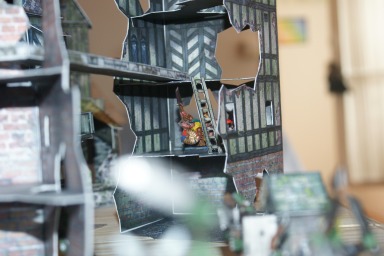 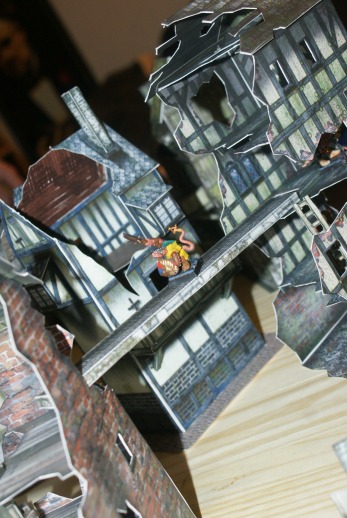 The walkway, great for epic fight, great for taking an arrow between the eyes! 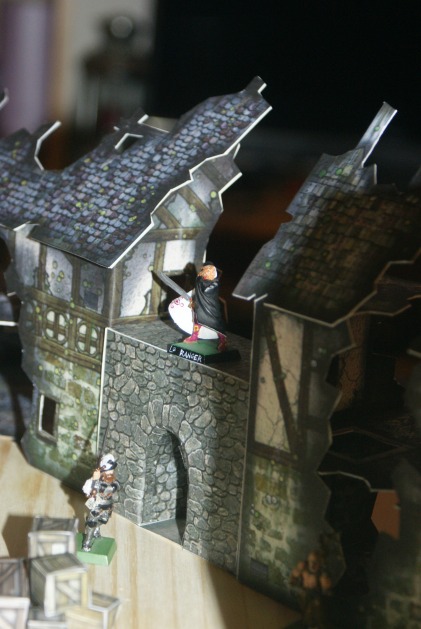 Orcs are coming to the party.

May Sigmar bring us luck! 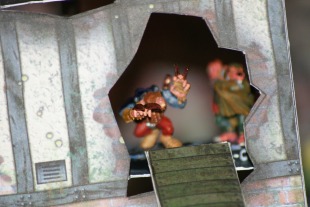 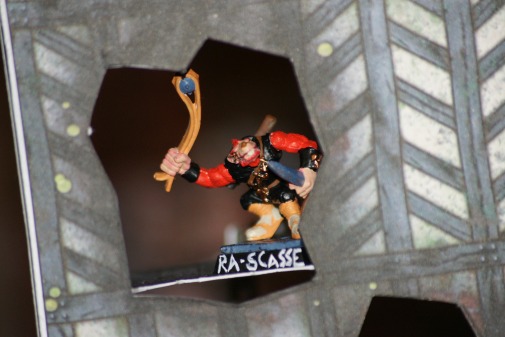 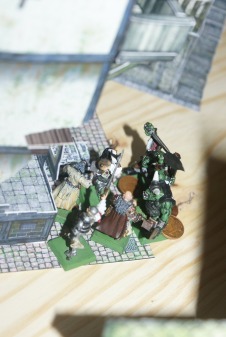 I think I could say it was a success. Deep friendship was born on that day, in the dark streets of Mordheim. It’s been seven years and we have shared far more since that day than just wargames, but that is another story.

I continued to expand the city for a while. Then, due to storage issues, I eventually had to slow down my pace: let’s face it, we have enough to play many games.

The six of us now all have less time to play (it seems we are supposed to work instead of play, what nonsense is that?) and we do not even live in the same (cursed) city anymore. But we still meet once a year for a Mordheim campaign and still use the great papercraft scenery that we owe our friendship (and our games) to.

Here are some pics of our current game tables. Be kind about the paintjobs, some are old and we do not enforce strict « only painted minis » rules (eventhough unpainted or partly painted minis are frowned upon).

Ambush is the Skaven way. 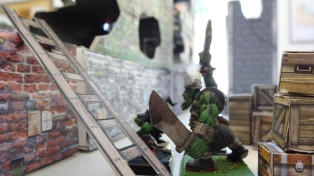 Balconies are great for bowmen and bowgobz alike.

When this wizard comes to town, beware of what may comes out of the wall you’re crounching behing! 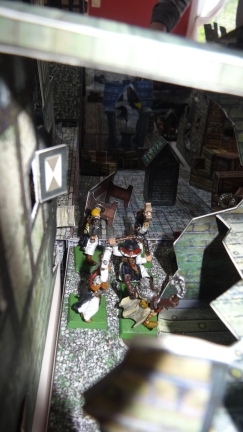 The Sis are there to bring peace to the City!

You do not want to mess with these dogs…

Is this an Elf hidding away from the ground?

What treasure lies in those crates? 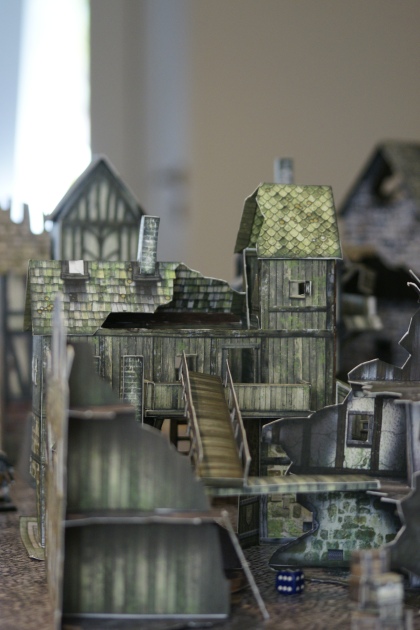 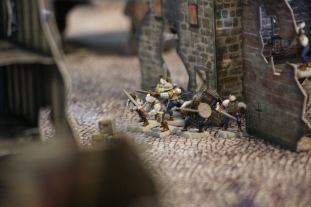 For gold and glory! 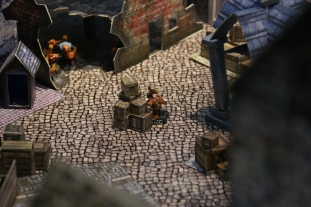 That day my henchmen kill the Orc Boss.

Is that comet coming right at us?..

Love how modular our table is now. 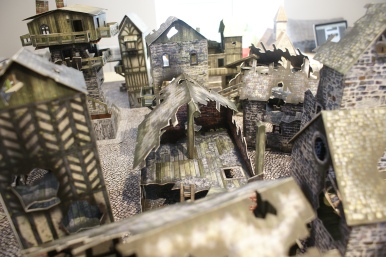 There may be rats… 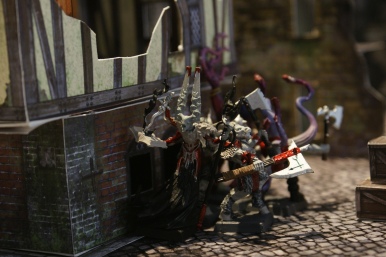 Chaos cultists on the loose.

This dice is actually a fragment of warpstone. 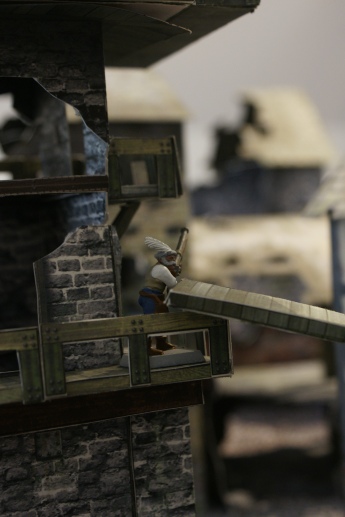 Would you please point me to the nearest chaos cultists? 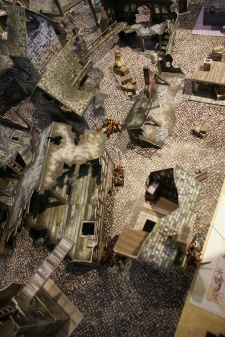 Rats in the street… 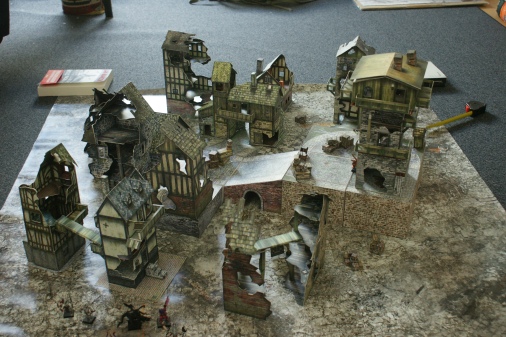 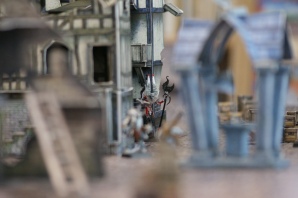 That day my henchmen killed that Magister.

There are some weird beasts in this town. 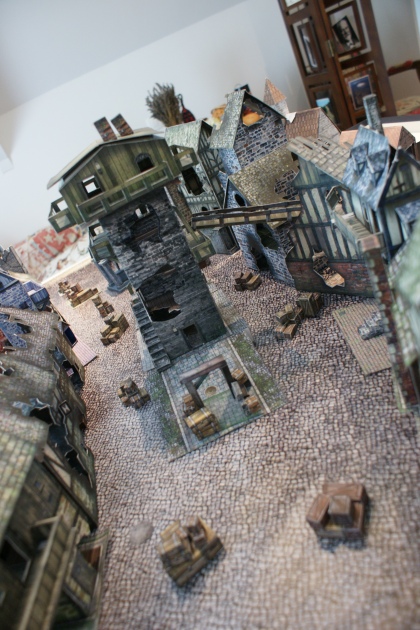 The tower, one of our favourite (and most epicness inducing) building.

Never let an Elf get up there…

Some thoughts on papercraft scenery

Scenery brings our games to the next level in my opinion, they allow us to create a setting which helps with immersion. It is especially important in games like Mordheim which relies heavily on narrative gaming. This papercraft city is as much a part of our gaming history as our minis.

As a hobbyist and a player I recommend papercraft scenery if you want something that looks good (even if not perfect), quick and fun to build and on a budget.

It is more resilient than it looks if you build it to last (I always use two layers of cardboard paper since I usually make buildings with accessible interiors). This really enhance resiliance. There are other ways to achieve the same (or better), @theantifunk would be the one to ask about that.

With a little love now and then (you may have to glue back chimneys and balconnies) your city will stand strong for years (well as strong as a city hit by a comet would anyway).

Storage is definitely an issue. You’ll need space and you’ll need it dry, but all terrains are space consuming and at least papercraft ones are light and easy to carry around (I moved twice since I built myself a city and carry it to Britanny once a year for our annual campaign), so this is important to me.

Of course I do not say it would look as good as plastic or resin kits. There are some wonderful things out there (the recent GW terrains are great and there are breathtaking fantasy stuff to be found too) and I intend to buy myself some of these kits. Sure papercraft looks well…like papercraft! The walls are too thin and you always see some white lines (I am too lazy to colour them black), and sure you should putty paste them to the table if you do not want the wind to ruin the city more than it is…

One last thing: I am not shy on additional support for floors on which minis should walk. Plastic minis are usually safe but metal minis (common in Mordheim) well…better extra safe than extra sorry! That being said I never had a building collapsing during a game. The only fallen minis (there were some spectacular falls over the years) were the players fault: victory dance around an unstable table could be quite the earthquake and you do not want to be hidding in the attic of a ruined house during an earthquake.

All of these downsides are true. Nevertheless papercraft offers you the opportunity to have a decent looking table in no time and obviously for far less money than plastic or resin (and once you downloaded plans, you can build quite a bunch of houses from the same file, all you need to « convert » them are cisors and your usual hobbyist crazyness). On top of that, building these is quite fun. Anyway, I guess you understood I am quite a fan!

Do not hesitate to ask if you need advice…

That’s all folks, hope you enjoyed the pictures.

This post is dedicated to five crazy dudes. VMVS…

Banner & post pictures by me (many Elves, Orcs, Undeads, Skavens, Mercenaries, Redemptionnists, Chaos Cultists and Sisters of Sigmar were hurt while making these pictures), except two pictures from the Mordheim rulebook that are obviously owned by GW.

I do not own any share in davesgames.net and never got any free stuff from him (nor did I ask for some), this is not a professionnal review of his products. Some of the terrain you see on the pictures is not from this website, but 80% is and I think it is the best quality, diversity and value for money I found (for now). I am simply a happy customer.