I started to play Confrontation a long time ago, when it was a alive and well, produced by a conquering French company called Rackham. That company died, but the game and minis lived in the heart and soul of the players (see here).

I never forgot the minis I loved. I really think some of the Confrontation minis were among the most imaginative and beautiful fantasy minis I have ever seen. For some time now I have been collecting these minis, buying them everywhere I can (especially here).

I recently decided to inoculate my friend Pigeon du Canal (he makes great photographs, see here) with the « wargaming virus » (WV+). Confrontation is very nervous skirmish game, easy to learn and teach. So we played a couple of times. Pigeon fell so badly for it that it surpassed my wildest hopes. Soon he was as addicted to the game (and its lore) as any of us poor souls. I had but one choice : I had to let him choose for my collection and paint an army for him.

He chose to play « Acheron », the undeads from the Confrontation universe. Good choice.

That’s how I ended up having to paint a roting smelly bunch of undead warriors, and that’s why you get a quick step by step here.

I am sorry for the low resolution pictures, they were taken with my phone, just to keep Pigeon posted while I was painting, before I had this blog in mind. The paints used are GW (unless stated otherwise), hence the names that do not mean a thing.

The minis are « Pantins Morbides » from the Confrontation range by Rackham. The ones here come from different sets as they were made with different weapons (in game stats are not the same depending on the weapon).

Black, black, black… And after the airspray, I usually apply a black wash, just to be sure. The black priming allows you to be really fast when it comes to skeletons and undeads. They are dark but, more important, all the holes and gaps of the skeleton are in the shade. You won’t have to worry about them later.

That’s where painting undeads is really rewarding (and really quick). Basically you just have to dry brush the whole mini with different colors. Here I used Skrag Brown, then Zamesi Desert, then a 50/50 Karak Stone & Zamesi Desert and finally Screaming Skull. Every color is dry brushed on the whole mini, except the last two. Since they are lighter it is better to apply them on smaller surfaces. 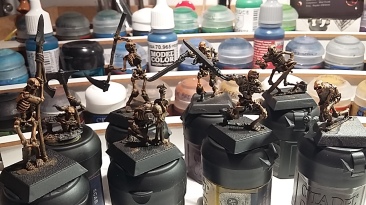 After the Skrag Brown dry brushing

Then after the Zamesi dry brushing (I always hesitate at that point, because I like their yellowish look) 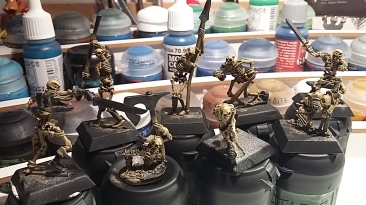 I love that guy rising from the ground !

At that point, for gaming minis, you have an honest result (regarding the bones). Now it is time to deal with the reste of the mini.

Since I have dry brushed everything, at that point everything is bone, including my fingers.

I renounced clean minis when I heard some guy in a shop say : « I do not see how a White Scar could keep his armour white. I mean, if I buy a white pair of pants, they are dirty after a 5 minutes walk in the city, and these guys are supposed to be clean while hunting down daemons in the Warp? ». A long discussion about the Warp and the fact that dirt may not exist there followed. But that stroke me as a good painting lesson (I was a beginner back then): to make your minis lively, make them dirty.

When you paint dead sack of bones rising from the cursed land of Acheron, this becomes a dire necessity. The dry brushing technique guarantees that the bones are not « clean white ». But one should not forget the rest of the mini. A dead skeleton brandishing a brand new sword strikes me as a bit odd.

The « Pantins Morbides » are basically naked (there are more heavily armed skeletons in the army, but the « Pantins » are the expendables weak version of the undeads). They wear some armour plates, some leather belts and dented weapons.

I did very little work (non actually) on the leather (I did not make it clean, but I did not make it old and rotting). But weapons and armour plates are important: they are beautifully crafted and they are the only way to break the monotony of the bones (and break some bones).

« The Sleepy Sentinel », as I call that guy, with his rusty spear.

Our little guy rising from the ground, I started to rust his armour.

A rising undead with a large axe.

As you can see on theses pictures the wood is fast painted (Rhinox Hide + Castellan Green in a combination of washes and dry brushing).

For the metal parts I wanted rust. The best technique for this is in a book called « Le Grand Livre de la Peinture sur Figurine » which was published by these guys. It does not seem to be in stock anymore (see here but do not pay it that price).

Basically the technique is a serie of reddish brown washes on a TMP base. The more layer you make, the more color you use (in a similar tone) the richer the rust. At one point, like for a good mayonnaise, I always think that I screwed up. Here I wanted heavy rust, so I applied the technique on most of the metal parts and I was heavy handed on the brown washes (here Balor Brown two times then a mix of Calthan and Balor on smaller areas than Balor). Then a Skrag Brown drybrush for texturing.

And then, magically, the last touch saves it all: dry brusing with the TMP base on small surfaces (the edges, the dents, the pointy bits) and then one last with an even lighter TMP on even smaller surfaces.

In the end a good rusty piece of metal should not shine. It should look like it is going to crumble in a pile of dust any minute. But that alone won’t do the trick, you need shiny parts on the edges and on the parts used to beatten something or someone up. This gives you what we call, in French, « le piqué de la rouille ».

Bear in mind two things : the ratio shiny/non-shiny parts on the weapon will determine how old it looks; all metals do not rust in the same maner and color (see the guy with the axe on the far left of the picture: bronze axe, blue/green rust).

Here is the result.

Our « rising from the ground » guy. Note the handle of the sword: gold doesn’t rust.

The guy with the bronze axe. I am not completly satisfied with the color of the rusted bronzed, but I let it pass. 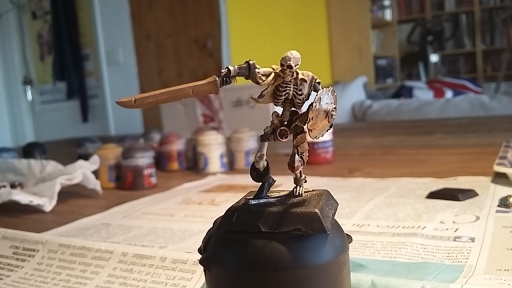 Love that one, the pose is great. A former swordsman.

Some shields have been found in the grave.

The idea for the bases came to me in Burgundy. It was the end of winter and we stayed in a hotel near a small stream of water surronded by sleeping trees. The frost was slowly melting. It was lovely and inspiring.

In the Confrontation lore, Acheron is a former human land now ruled by necromancers. It is a dead country. I imagined burned and cold, never really defrosting. Here were my bases!

For the basing itself I used this (pretty big « sand », very irregular). The little plant in the background is plastic. I found it in my parents’ attic. I think it was designed for decorating fish tank.

Now the real magic: cristal acrylic gel. Very easy to work with: you take some with a stick then apply on the base (see on the plant), not everywhere, just as late winter frost is not uniform. It is a very viscous material and when drying it becomes transparent: there you have your melting frost!

That’s all for the « Pantins Morbides ». You’ll see more of Azael’s attendants here and there and now that they are done, you can see them all here.

Banner picture is art previously owned by Rackham, the rest of the pictures are by me.