Rackham’s Wolfens are wonderful models (see one here): they are big, they look wild, they are muscular…and they are awful to build! If you ever saw the minis you know what I mean: the have hudge muscular torsos that you have to stick on a ballet dancer waist. Glue won’t do the trick, there is no way around drilling these metal monsters to reinforce them. Anyway, if you only know plastic models I guess you do not know what I am complaining about (lucky you) but if you knew the good old lead/white metal age you’ll get it.

Wolfens are great and in their great wisdom the guys at Rackham gave Acheron (the undead faction of the game) many zombies from other factions, including Wolfen.

They are great sculpts with loads of details (rotting flesh and fur, bones, armours parts fetched on foes from different factions of the game,…). The only weird thing about them is their hears. They do have unusually long hears (longer than their living counterparts). It bothered me at first but I ended up liking the look it gives them.

That one was a good exercise for me regarding rotting flesh. I went for a pale and sick looking flesh. I tried to give contrast to the whole thing with the yellowish fur and the red insides that shows on some parts of the mini (he spent quite a few months in the grave before the necromancer found him in my opinion). The other part I liked doing was the rusted scythe. I am pretty proud of my rust recipe (well I did not invented it, but I practiced it a lot). The base is the same as the rest of the warband (see here) but I added some frost on the scythe itself.

Here are some pictures of the beast, hope you like him. 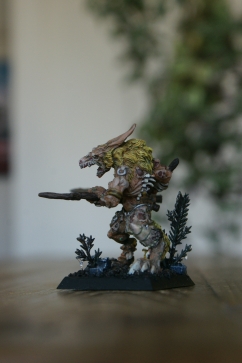 Well that’s all for folks, see you soon.

Banner picture: illustration previously owned by Rackham, other pictures by me.